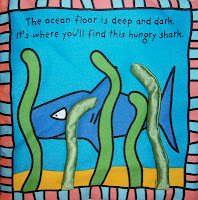 First off, the title is misleading (beyond the fact that you'll need to avoid calling it "Busy Bee" by mistake).  Like Godot, Fuzzy Bee never actually appears.  His likeness graces the cover but is nowhere to be found inside.

Anyway, Fuzzy Bee has a posse.  It seems implausible that a bee would have allies as diverse as a snail or a worm--given that it spends most of its time in a hive full of other bees--so if your child is well-versed in apiology, he or she might have some questions about this.  (For the less informed child, you might also wish to explain that not every part of a bee is "fuzzy.")

An omniscient narrator introduces each of Fuzzy Bee's friends in turn, alternately ridiculing them ("Keep moving snail, you're really slow") or making spurious claims about their temperament ("This dragonfly is really tame").  The last page contains the soliloquy of a megalomaniac butterfly fishing for validation: "Oh me, Oh my!  I wonder why / I'm such a splendid butterfly!"

Fuzzy Bee is also a text mired in scandal; two characters have been excised from the most recent version without explanation.  Rumors that this move was spurred by an affair between Sally Spider and Mr. Fly are still mere allegations at this point, however.

Then there's Squishy Turtle and Friends which, like a Whit Stillman film, continues the thematic elements of Fuzzy Bee while introducing a new cast of characters.  Oddly, the narrator seems to be sadly misinformed about blue whales, suggesting that they could potentially live in a freshwater lake given that it's large enough, and that they eat "little fish with shiny scales."  To divert the savvy reader from questioning the veracity of these claims, the narrator threatens you with a crab who "knows / just how to pinch your tiny toes," and then ends the tale with the threatening spectre of a "hungry shark" (see above).

Lies Your Parents Told You

Whenever April Fool's Day rolls around, I think about a particularly gullible relative of mine who believed that spaghetti grew on trees.  He had been duped by a 1957 spoof broadcast of a "Spaghetti Harvest" and for years believed in the existence of Swiss spaghetti orchards.

I've always thought April Fool's Day was pretty lame, and now with the advent of social media, it's close to unbearable ("ZOMG Im pregnant!" "Lulz, j/k!").  And then I realized that if you're a parent, you get to perform April Fool's Day-style trickery all year round.  A kid is going to learn about the world through his parents ("This is a doggie.  We pet the doggie verrry gently."  "That is a lion.  We back away from the lion verrry slowly."), and so there's a certain trust in place there, and parents have always used this to their advantage.  They will tell you that if you make that face again it will freeze that way, or if you swallow a watermelon seed, a vine will grow in your stomach, or that if you suck your thumb again, a tailor will materialize and cut it off.

The idea behind most of these parent-isms is that the ends justify the means.  You don't want your kid making that face, or sucking his thumb, or whatever, and saying "watermelon seeds aren't nutritive and could present a potential choking hazard" is less tangible an idea than the image of growing a watermelon vine in one's gut.  Of course, the tricky part is when the kid stops believing you-- he tried it, and his face won't freeze after all-- or, conversely, when he won't stop believing (with apologies to Journey), and therefore refuses to eat noodles for fear of growing an internal spaghetti forest.

Parents also tell kids lies just because it's fun for them sometimes, with the same motivation, I imagine, that compels your older relatives and clueless coworkers to send you email forwards with animated gifs that tell lame, dubiously inspiring stories and then promise at the end that if you don't forward it to fifty other people you'll die, possibly from a watermelon seed.

Some of the lies even seem beneficial-- the Tooth Fairy, for example, is a useful tool to help kids get over the fear that's a natural result when parts of your body suddenly start falling off, leaving gaping, bloody holes in your face.  The idea that a mythical being will visit you and leave you money when this happens seems like a pretty fair trade, then (accounting for inflation, of course-- if the Tooth Fairy leaves you a quarter but gave that girl in your math class a ten-spot, that's pretty cold comfort).

As I began reading parenting manuals, I wondered what they might have to say about the acceptability of parental white lies.  So far, Santa Claus, the Easter Bunny and his ilk haven't made an appearance, but I did come across a particularly unexpected bit of advice in that venerated staple What to Expect the First Year.  In describing how to help your child "reach his or her maximum potential," it suggests: "[try] talking about people you see ('That lady is very old,' 'That man has to ride around in a chair because he has a boo-boo on his leg,' 'Those children are going to school')" (384).

So... I'm supposed to foster his genius by teaching him to talk about the handicapped and the elderly like they're not there?

Or maybe the lesson is to construct plausible fictions aloud about everyone you see around you, like you're taking an oral exam for a freshman creative writing class. ("That girl's pants are too tight because she eats her feelings," "That man is driving that car because he's insecure about his masculinity," "That woman is using coupons and paying with a personal check because she doesn't realize that some of us have places to be right now.")

While not exactly a lie, the statement that a stranger you see who uses a wheelchair "has to ride around in a chair because he has a boo-boo on his leg" is obtuse at best.  This strikes me as one of the more pernicious and ignorant "tales for children" that I've come across yet.


Lesson learned:
...And stop cracking your knuckles; it will give you arthritis!