Some childhood trauma seems to be nearly universal if you came of age at a certain time--what child of the Eighties didn't have nightmares about wheelies?--but other sources of fear are unique to the individual.  I'm not sure anyone else on the planet shared my horror at the Study in the board game "Clue," for example.  But I have been surprised at how many people remember--and not with fondness--the Uncle Arthur stories.

I haven't ever encountered anyone else who had this particular experience, but for some reason, the "Little Boy Blue" poem I knew growing up didn't have anything to do with blowing horns or cows in the corn.  I remember asking other children at school if they knew "the real version" and being stared at as if I had lobsters crawling out of my ears.  The version I knew--by Eugene Field--was a bit more bleak than the well-known nursery rhyme.  It begins:


The little toy dog is covered with dust,
But sturdy and stanch he stands;
And the little toy soldier is red with rust,
And his musket moulds in his hands.
Time was when the little toy dog was new,
And the soldier was passing fair;
And that was the time when our Little Boy Blue
Kissed them and put them there.

The poem confirmed my belief in the emotional lives of toys, and upped the stakes a bit, because not only could they die, but you could die as well!  The phrasing too of the child's death-- "And, as he was dreaming, an angel song / Awakened our Little Boy Blue," was eerily similar to the conclusion of "Jesus Understood," and suggested the possibility that not only could Jesus kidnap and murder you, but there were angelic henchpersons who could do the deed as well.  I imagined them toting around harp-cases with guns in them, like heavenly old-time gangsters.


Lesson learned:
Always make provisions for your stuffed animals in your will.

Email ThisBlogThis!Share to TwitterShare to FacebookShare to Pinterest
Labels: poems

The Island of Misfit Toys

Now that I'm a parent, I often wonder what future blog fodder I might be exposing my child to.  Of course, I'm not going to be reading any Uncle Arthur stories at bedtime, and I won't be popping Return to Oz in the DVD player expecting Bert Lahr's jowls to be the scariest aspect of it, but it seems as though a certain amount of childhood trauma is inevitable.  This truth has recently been driven home for me since I've started having nightmares about alien giraffes.  Let me explain why.  First, a quick review--

However, this is what a giraffe looks like on children's goods:


Here are a few other examples of the Alien Giraffe phenomenon: 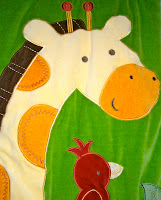 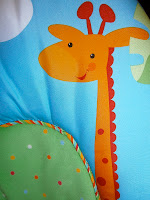 And the weirdest one of all... the giraffe who was in a horrible spill at a chemical factory, and as the ooze pooled around his mangled feet, was transformed into this monstrosity: 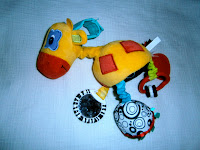 Once you start noticing it, you'll begin to see hideous, smiling Island of Dr. Moreau-type creatures everywhere you look.
To wit:
Then there are children's clothes.  Sometimes they have very helpful instructions embroidered on them:
And sometimes, they offer really terrible advice:
Lesson learned:
At least if you catch the mutant giraffe toy moving, you can kill it.


Buy your own Mutant Giraffe.
Posted by Smother Goose at 9:54 AM 1 comments