So I will admit, as a child I might have been somewhat... oversensitive.  I was also pretty prone to nightmares, and there was no rhyme or reason for what exactly would trigger them.  Here I offer a brief roundup of a variety of nightmare source material that doesn't quite each merit its own individual post.

* "The Red Shoes" cartoon from Fairy Tale Classics (1983)
I had this cartoon on a Beta tape along with anime versions of "Cinderella" and "The Ugly Duckling."  As I recall, the girl's red shoes would force her to dance, and because of them she nearly danced herself to death, or at least to complete exhaustion.  When we'd go to Stride Rite, I'd shriek at the mere suggestion of buying red shoes.  They would not touch my feet.  Later, I'd wonder how Dorothy Gale could be so foolhardy; didn't she know those ruby slippers would propel her into a They Shoot Horses, Don't They?-like nightmare scenario faster than she could say "Auntie Em?"

* Spike Jones
Best of Spike Jones
Not Spike Jonze, the director of Being John Malkovich, but Spike Jones, the bandleader.  We had this album in our car for years, and this face would leer at me from the front seat tape deck every morning on my way to preschool.  Just look at those wild, red, beady eyes--doesn't he remind you of Judge Doom in psychopathic toon form?  Not to mention how catchy his song "Der Fuehrer's Face" was, although it didn't take me too long to learn that a preschool singing ditties (albeit satirical ones) on the playground tire swing about "der führer" attracted the wrong kind of attention.  Thanks for nothing, Mr. Jones.


* The "Study" in the board game Clue.
Clue Parker Brothers Detective Game 1972

Surprisingly, I had no problem playing a game predicated on the idea of homicide.  Instead, it was the game board itself that gave me the heebie-jeebies.  In the version of the game that we owned, the Living Room was represented by a doily, the Hall by an Oriental rug, and the Study--well, looking back I guess it's supposed to be some kind of wood grain, but to my eyes it looked like the Study was on fire.  My fear of fire being well-established at this point, I simply couldn't handle the thought of moving my plastic playing piece into that inferno.

* Any "Francis the Talking Mule" movie, but specifically Francis Goes to West Point (1952).
The Adventures of Francis the Talking Mule, Vol. 1
Now I don't really understand the appeal of a whole series of films dedicated to a talking mule, but as a kid, I was always drawn to the talking-animal genre.  The Shaggy Dog?  Loved it.  "Mr. Ed?"  Of course, of course.  And one of my all-time favorites was a little gem called The Cat From Outer Space.  So, at some point I saw Francis Goes to West Point, and there's this scene where Francis the Talking Mule sits on a football during the game and deflates it.  I'm not sure exactly why this bothered me so much, but I think I was convinced that, having been to football games and witnessed firsthand how unreceptive most fans are to any interruption in play, the spectators would soon descend upon the hapless Francis all Lord of the Flies-style.  I couldn't watch any of the movie after that, so I don't know what actually happens, but it did leave me A) not a fan of football and B) terrified of mules.  Luckily, mules are relatively easy to avoid in the suburbs.

This guy started making regular cameo appearances in my nightmares as soon as I saw this commercial.  A man with the cadence of Max Headroom, dressed all in black, shouting nonsensical bad guy names into the darkness?  What was this supposed to sell?  So when my brother received The Legend of Zelda for Christmas that year, I was almost too scared to see what the actual game would be like.  Surprisingly, it had nothing to do with this deranged reject from mime school, and I found that I loved the game (although unfortunately I would never be able to play the sequel).

Lesson learned:
Philip Larkin was right about Mom and Dad, but he should have included all misguided marketing toward kids in there as well.
Posted by Smother Goose at 12:39 PM 1 comments

"Flowers and Trees"--an innocuous title, no?  Who doesn't like flowers?  Or trees?  And you know what kind of a cartoon this is?  Why, it's a "Silly Symphony"-- silly means good goofy fun, and the symphony means it's classy.  And yet, I hate this cartoon.

They used to show the Silly Symphonies all the time on the Disney Channel back in the day--classics like "The Three Little Pigs" or "The Grasshopper and the Ants" or "The Ugly Duckling."  I like the idea of the Silly Symphonies, because, like Disney's "Peter and the Wolf," or Fantasia, they presuppose that classical music is for everyone, and that even toddlers have the attention spans necessary to enjoy a cartoon propelled primarily by the tones of woodwinds or stringed instruments.  (Forty-two years after the last Silly Symphony was produced, we would have the advent of MTV, which still suggested that kids can relate to music, but showcased just how much their attention spans had deteriorated.)  So, I want to like them, but I just--yeah, I still hate them, this one especially.

I hate the anthropomorphic gendered trees, I hate the racist caricature daisies, I hate the creepy smiling dancing phallic mushrooms, and I hate--oh how I hate--the male trees' long, spindly root-fingers.  They are hideous--shades of Max Schreck's gnarled claws as Nosferatu, only so much more horrible since they're in cartoon form.

The plot of "Flowers and Trees" goes like this: boy tree likes girl tree, but girl tree gets abducted by an evil tree stump with a nasty knothole bellybutton (do anthropomorphic trees have a fetal stage?).  Boy tree fights for the girl and wins, so the evil stump starts a fire (here we go again) and the trees, being made of wood, are pretty darn flammable.  The forest goes up in flames as the flowers, the birds, and the bugs all flee for their lives.  The evil stump winds up lying dead as vultures circle his rotting (he's a hollow stump after all, so I'm assuming here) corpse.

But then it ends with a tree wedding, so I suppose this is meant to be in the vein of a Shakespearean comedy.  Although, like The Merchant of Venice, it's not very funny.

"The Cat Came Back"

This song has been around since the late nineteenth century, and has its origins in overt racism, but for some reason it's stuck around for over a hundred years.  There's no getting rid of it... much like the eponymous feline itself, I suppose.

I'm pretty sure I saw the cartoon version of the song on Nickelodeon, back in its early days when it used to broadcast a lot of shorts, not to mention a lot of Canadian content.  (Remember "You Can't Do That on Television?"  Barth terrified me, and why did they have a recurring sketch depicting a child's execution by firing squad?  Perhaps that's a post for another time...).

Anyway, the cartoon is essentially about a man's repeated futile attempts to abandon his pet.  Mr. Johnson tries dumping the cat deep in the woods, launching him into the air in a hot air balloon, and tying him up in a sack and drowning him at the bottom of the sea.  Mr. Johnson's home furnishings and sanity slowly unravel as he continues to try to dispose of the cat--and at one point we learn that there are women tied to the railroad tracks all around his isolated little house.  Who is tying these women to the tracks?  Our protagonist is clearly a psychopath.

This diagnosis is confirmed when old Mr. Johnson finally tries to explode the cat with about a ton of dynamite.  He blows up his house and himself in the process, and his dead body lands on the cat, killing him and leaving the cat's 9 ghost lives to torment Mr. Johnson forever in the afterlife.  Thomasina this is not.

"The Cat Came Back."  Dir. Cordell Barker.  National Film Board of Canada, 1988.
Watch it on YouTube here.
Posted by Smother Goose at 1:25 PM 0 comments 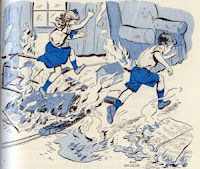